The daVinci Robotic Surgical System is a supercomputer with mechanical control over tiny surgical instruments. The term robot is a misnomer: the daVinci Robot represents a master-slave relationship. The robot has no autonomous function. Every movement of the robot arms is controlled by the surgeon. The daVinci Robot has multiple features that enable roboticists to perform certain laparoscopic procedures with greater ease, better quality, and on the whole, fewer problems for the patient. The daVinci Surgical System is most beneficial in tight corners of the body, or if there is a challenging reconstructive aspect (eg, prostatectomy in both instances). The following details help to explain why the daVinci Surgical Robot is such a great tool: 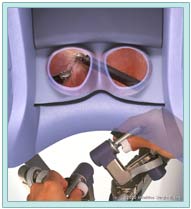 The daVinci Surgical Robot is capable of magnifying images 10-15 times normal. This is more than what is seen with standard laparoscopy, and of course, much more than the naked eye. This allows the surgeon to be more selective about the dissection of critical structures by fractions of a millimeter.

The Si daVinci Robot telescopes carry more light than standard laparoscopes, making it easier for the operating surgeon to see.  The “chip-on-a-tip” technology of the Xi send the images from the endoscope tip electronically without loss of light by optics throughout the scope.  Not only does this maintain a brighter image, but the endoscope does not need to be so wide.  The camera port is thus a smaller standard 8.5mm.

In standard laparoscopy, distance of the tissue structure from the port site on the abdomen causes amplification of motion at the instrument tip. A small motion outside the body causes a relatively large motion on the inside. This can frustrate attempts to target tissues. With the daVinci Surgical Robot, motions are filtered and de-amplified up to a scale of 5 to 1. In other words, the surgeon would have to move the manipulators up to 5 inches in order to cause movement of only an inch on the inside of the body. This eliminates natural hand tremor entirely, allows the surgeon to target tissues with much greater ease, and gives the surgeon a certain finesse that surpasses human capabilities in both the open and standard laparoscopic realms.

In standard laparoscopy, the surgeon must stand, sometimes in rather awkward positions for several hours. This can be quite fatiguing. With the daVinci Surgical Robot, however, the surgeon is seated comfortably at a console. The hands are positioned in a natural forward position, and the forearms are given a rest to lean on. This configuration relieves much stress on the operating surgeon, and that often translates to a better quality surgery for the patient. 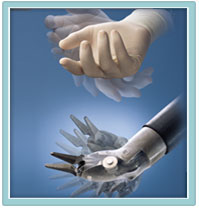 Standard laparoscopy employs fixed instrument tips. The daVinci Surgical Robot, however, has instrument tips which rotate and angulate in multiple different directions. This allows for imitation of normal wrist and elbow motions. In fact, it’s better than normal human motion – it’s capable of spinning 2 full revolutions, whereas the human hand can only turn about 270 degrees.

The abdomen is filled with carbon dioxide gas under pressure during robotic surgery. This is no different than what is done during standard laparoscopy. It provides a generous working space and prevents small vessels from bleeding. While it is not unique to robotics, it is one of the key features about laparoscopic surgeries which significantly reduce typical blood losses otherwise noted in open surgery.  At Morristown Medical Center we use the AirSeal insufflator (by SurgiQuest, Inc.), a special unit which maintains constancy to the working space and facilitates more advanced robotic surgical interventions.

With the use of ICG-dye and a Near InfraRed Fluorescent Camera (an add-on feature to our Si robots, and standard with our Xi robot), tissues may be evaluated intraoperatively for certain distinguishing characteristics.  It’s similar to night vision goggles. Normal kidney tissue lights up green with Firefly, whereas kidney tumors typically do not light up.  This facilitates removal of kidney tumors in such a way as to make sure that the tumor is removed entirely  It can also be used to establish proper renal vessel control prior to tumor resection.  Firefly also delineates viable bowel, useful during urinary reconstruction following cystectomy for bladder cancer.

The combination of these various elements makes it look and feel to the operating surgeon as if the surgeon were actually inside the person, moving about at will. Structures of interest are more easily seen, targeted or avoided. The daVinci Surgical Robot makes it easier to perform certain operations laparoscopically. For you, the patient, the generic benefits of laparoscopy include smaller incisions, less scarring, less blood loss, fewer infections, shorter hospital stays, and quicker return to normal activities. In certain operations, such as daVinci Prostatectomy, additional qualitative benefits have been realized For more details, click here..