There are several treatments available for UPJO, all aimed at opening the blockage between the ureter and the renal pelvis. 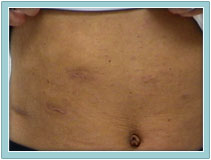 Open dismembered pyeloplasty had long been the gold standard for treatment of UPJO. It had the best long-term success rate (~92% for adults). In this operation, the junction between the renal pelvis and ureter is spliced out, and the healthier tissues on either end of the splice are brought back together. Other forms of pyeloplasty are designed to reshape the junction so that its caliber is wider without actually removing the scarred or diseased segment. These methods are a bit trickier and the success rates are not quite as good as the dismembered approach. The main deterrent to the open approach has been the large incision, with the attendant postoperative pain, disfigurement, and opportunity for infection.

Endopyelotomy
In endopyelotomy, the junction is incised and then allowed to scar over a stent with the hope that the new scar will be sufficiently wide to allow flow of urine from the kidney through the ureter.  Various forms of endopyelotomy were designed to counter the drawbacks of the large open incisions.  The retrograde methods are done through the urethra and bladder without making any incisions on the abdomen at all.  The antegrade method uses a small poke hole in the back to gain access to the junction from above.  While considered minimally invasive and less painful, endopyelotomy has a long-term success rate of about 83% — considerably less than a dismembered pyeloplasty.  An endopyelotomy is a particularly poor choice for patients with certain types of anatomy, such as in the setting of an aberrantly crossing vessel, or if the ureter inserts very high at a non-dependent portion of the renal pelvis.  On the other hand, it may be a very good choice for some elderly patients who are too frail to risk a major reconstruction if they have the right anatomic features.

Robotic Pyeloplasty
Robotic pyeloplasty represents an excellent balance between adequate reconstruction and minimally invasive features to avoid large open incisions.  The junction may be spliced (dismembered) just as in open surgery, and these operations carry the same long-term success rates (~92% for adults).  They also carry the usual benefits of laparoscopic surgery over open surgery:

Dr. Kaynan is uniquely skilled in both trans-abdominal techniques and retroperitoneoscopic techniques. In the retroperitoneoscopic method, the ureteropelvic junction is approached directly through the flank, skipping past intra-abdominal organs such as the colon. This method is potentially useful in patients with “hostile” abdomens, previously operated upon multiple times, for example.  In the unlikely event of a postoperative bleed or urinary leak, the problem is better contained to the flank and patients are not as likely to get sick from these events.